A great event for a great guy 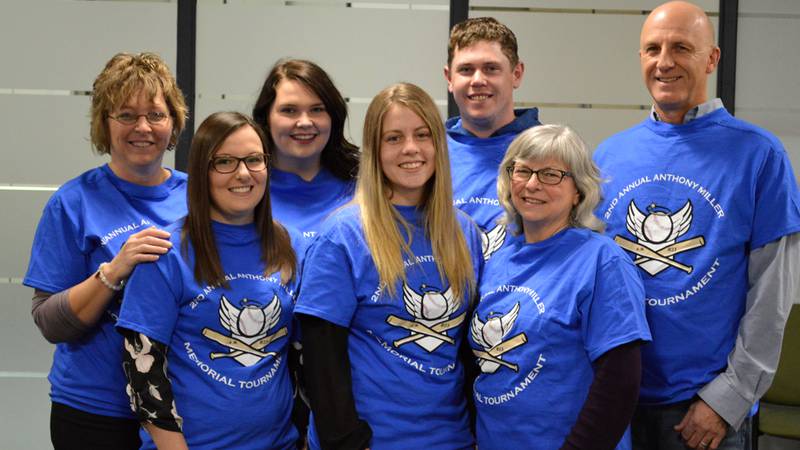 Friends and family of Anthony Miller, who passed away from cancer in 2016 at the age of 23, created the Anthony Miller Lob Ball Tournament in support of the QEII Foundation, helping other Atlantic Canadians facing a cancer diagnosis. Front (left to right): Caitlin Parks, Dawson White, Florence Miller; back (left to right): Angie White, Emily White, Tyler Roulston and Troy Miller. (QEII Foundation)

On Feb. 9, 2016, the community of Kennetcook, N.S. and the local baseball community were devastated when cancer took the life of 23-year-old Anthony Miller.

Almost two years later, both communities look forward to coming together each Thanksgiving to celebrate his life at the Anthony Miller Memorial Lob Ball Tournament.

A “great tournament for a great guy,” as family and friends like to call it, has already raised over $10,000 for cancer care and research at the QEII Health Sciences Centre, through the QEII Foundation.

Anthony grew up in the minor baseball system in Kennetcook and surrounding communities, winning bantam and midget championships and the Nova Scotia intermediate AAA championship in 2014 with the Noel Road Jays.

His talent was always apparent, but his positivity is remembered most. Memories recalled by family and friends echo that it didn’t matter who you were, Anthony always had time for you.

“He was always a big boy — dimples galore,” says his mother, Angie White. “Those dimples and that smile carried him through life.”

In 2015, Anthony received a diagnosis of neuroblastoma, a type of cancer.

The family recalls an instance after his biopsy where a nurse moved him to a larger, private room to accommodate all his friends and family, even bringing in several cots for immediate family members.

“I remember thinking, ‘Look what they’re doing for us. They don’t even know us,’” says Angie.

Anthony’s family and friends said his positivity throughout his battle was contagious.

“He was the strongest person I think any of us ever met,”says Troy.

“He stayed positive the whole time,” says girlfriend Caitlin Parks. “He took care of us.”

“Why not help others that find themselves where we did?”

Caitlin, along with Dawson White and Emily White — the tournament organizers — say they were sitting outside having a barbecue in September 2016, sharing stories about Anthony, when they came up with the idea for a fundraising tournament.

“We were thinking, ‘How are we going to remember him with everyone else,’” says Dawson.

They decided on lob ball because it is an accessible game, which would translate to more participants.

Although Anthony was well known in his local community and the baseball community, his family and friends are still in awe of the tournament’s reception.

“We put it on Facebook and it filled up in one day. Over 200 members in one day,” says Dawson.

After a short month of planning, 16 teams took over the three community fields, by donation, for the impromptu tournament and organizers say it was “easily the biggest in their community.”

Afterward, $2,580 was donated to the QEII Foundation to help other Atlantic Canadian cancer patients.

“There have been quite a few individuals in the community that have passed away because of cancer and had care from the QEII,” says Florence Miller, Anthony’s stepmother.

“Our first donation went to the radiation and oncology department where Anthony had his radiation,” says Caitlin.

“It is a whole new experience dealing with something like this,” says Angie. “Why not help others that find themselves where we did?”

Although planning for the second tournament started earlier, everyone agrees it was another opportunity to celebrate Anthony that gained four more teams, upping the total to 20 in October 2017.

“Seeing everyone come together for Anthony is awesome. You can just feel the type of guy he was when you’re there,” says Tyler Roulston, one of Anthony’s best friends.

With the entry fee increased to $225, a 50-50 draw, and winning teams donating their winnings back, the second tournament raised over $7,500 for cancer care at the QEII.

Anthony’s family says they knew of so many of Anthony’s friends they’d never met and it was amazing how many of them walked up to them with stories.

“He made all those friendships and they’ve lasted,” says Angie. “It’s heart-wrenching, but it’s wonderful.”

Anthony's family and friends hope to see an expansion of the tournament, which has now become an annual celebration of Anthony, a way for the community to come together and a fundraiser to help battle cancer. 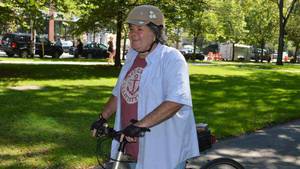 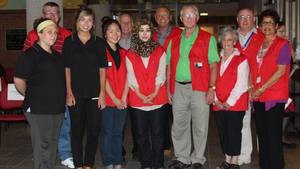 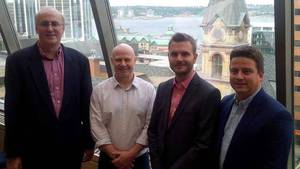