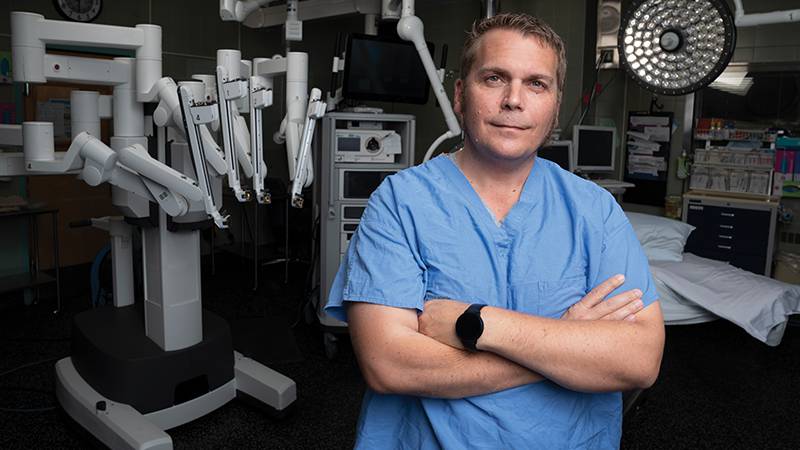 Civilian scientist and kidney cancer survivor Warren Connors has created the ‘A Pint of Robotics’ presentation series to raise awareness of this ground-breaking robotics research and innovation happening in the region, and to raise funds to support it at the QEII. Photo: Mike Tompkins

“My background is in autonomous robotics — looking at how robots can use their sensors to understand some of the world around them and make their own decisions based on the constraints they’re given,” Warren explains.

It was in November 2019, early on a Saturday morning, in the Halifax home he shares with his wife Amy that Warren woke up in severe pain.

“This wasn’t a general ache,” he recalls. “This was, ‘I need to go to the hospital right now,’ kind of pain.”

While his initial hunch was kidney stones, a CT scan revealed a much more serious diagnosis: each kidney contained a large cancerous mass. It was in the midst of this incredibly stressful day that a surgeon at the QEII Health Sciences Centre raised the possibility of robotics surgery.

“They told me about the advanced capabilities they had, and I was intrigued because I’m a robotics guy,” he says.

Warren soon underwent two surgical procedures performed by Dr. Ricardo Rendon, who was assisted by the da Vinci robot. The surgical robot, funded entirely by QEII Foundation donors, is a game-changer for patients like Warren facing a cancer diagnosis.

Following this first surgery, Warren was up and moving around later that same night.

“That was after removing two-thirds of my left kidney,” Warren says. “I went home after just three days. It was really amazing.”

Five weeks after the first operation, he had surgery on his right kidney, and this time his hospital stay was just two nights. Two weeks after that, Warren was back at work. His kidneys are working fine, and he’s resumed his regular life.

“I was only 43 and Dr. Rendon was thinking about my future quality of life, which I really appreciated,” Warren says. “I went from the worst day of my life to going back to work, like nothing happened, 10 weeks later.”

Warren was moved by the quality of care he received at the QEII and the generosity of donors to the QEII Foundation that made surgical robotics technology possible.

“When I learned that this entire program is funded by ordinary people here in Nova Scotia, it felt incredibly humbling for myself and Amy. People who I had never met made donations that changed my life.”

“It was a chance for people to come out and socialize, have a drink and hear about some really cool science that’s happening in their backyard,” Warren says.

Scientists and researchers from a range of disciplines made presentations over the course of three nights. Admission was free, but audience members were asked to make a meaningful contribution and join the community of donors who make robotics at the QEII possible. To date, the event has raised more than $5,700.

From medicine to manufacturing and from the deep sea to outer space, the scope of robotics innovation taking place in Halifax is vast. It includes the QEII Foundation’s latest $2.5-million campaign to fund another surgical robot for the QEII, this time for orthopaedic surgeries.

Through these presentations, Warren wants to raise awareness both among the general public and with others working in specific areas of robotics research.

“As I spoke with Dr. Rendon and others, I became aware that we often don’t know what other groups are up to,” Warren says. “It’s very easy to stay on our own little roads — when I go to sonar and deep-sea robotics conferences, I’m not running into many people in the medical field.”

As within his own field of research, Warren says, surgical robotics will amplify and improve — but not replace — the expertise of human professionals. By being both less invasive and more precise, robotic systems can produce surgical outcomes that involve less bleeding, fewer complications and shorter hospital stays.

“The precision, stamina and capability that come with a robotic system amplify the capabilities of a good surgeon.” 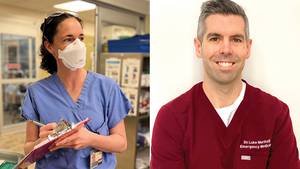 Checklists, standard procedures and teamwork go hand-in-hand with the smooth delivery of health care, but the COVID-19 pandemic has put a whole new... 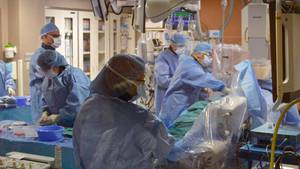 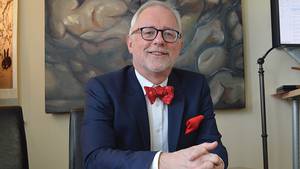 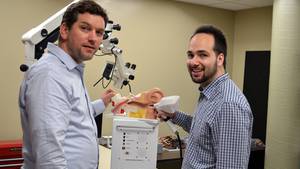