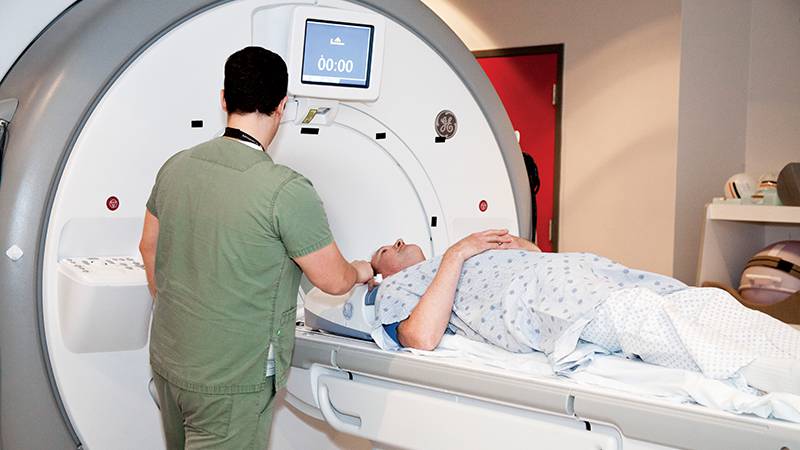 A team at the QEII and Dalhousie University, using research methods and software tools only available in Halifax, found that people with bipolar disorder and more extensive leakage to the blood-brain barrier had more severe depression and anxiety and were more resistant to medicines used to treat the disorder. The high-resolution results of patient scans from the QEII’s 3T MRI — funded by the QEII Foundation — allow for precisely detecting blood-brain barrier leakage. – Darren Hubley

A unique collaboration between medical experts is leading the way to curing the most severe cases of bipolar disorder, a mental health condition that causes extreme mood swings between mania and depression.

They found that those with more extensive leakage in the blood-brain barrier had more severe depression and anxiety, a more chronic, worsening course of bipolar disorder and poorer overall functioning.

“It looks like we have discovered an underlying mechanism that is associated with more severe forms of bipolar disorder,” says Dr. Calkin.

Normally, the blood-brain barrier is a boundary that protects the brain from potentially damaging toxins and pathogens. When leaky, certain chemicals and proteins can enter the brain and cause inflammation.

This was the first time in the world psychiatric patients had their brains imaged in a study to look at the leakiness of the blood-brain barrier.

“It is a completely new concept in psychiatry to look at a psychiatric illness in this way,” says Dr. Calkin, the founder of the QEII’s Mood and Metabolism Program. “It looks like targeting the blood-brain barrier may be a new way of getting people well,” she adds.

“In a case study, reversing insulin resistance healed the blood-brain barrier in a relatively short period of time,” says Dr. Calkin. “After 12 weeks of treatment with metformin, an insulin sensitizing drug, the patient’s depression went into remission and their blood-brain barrier was no longer leaking. Previously, this patient had failed to respond to other psychiatric treatments and had remained unwell for many years.”

Bipolar disorder affects up to five per cent of the population. Mood-stabilizing medications, like lithium, help some patients go into remission but others don’t respond well to these medications and see their symptoms worsen, often leading to severe depression and greater risk of suicide.

What causes bipolar disorder to progress and who is more at risk hasn’t been well understood. Dr. Calkin is excited their study sheds light on these questions by showing a clear link between blood-brain barrier leakage and more severe bipolar disorder symptoms. The study highlights the potential of using brain imaging as a biomarker for identifying the patients who will progress to more severe forms of bipolar disorder, she says.

By identifying a biological cause of the psychiatric disorder, Dr. Friedman believes they can address another serious problem: the stigma surrounding bipolar disorder.

“Often, depression is not seen as a biological disease,” he says. “It helps patients know that the disease is not their fault.”

For the past 15 years, Dr. Friedman and his team have looked at what happens with the brain when the blood-brain barrier is leaky. Using new MRI and EEG techniques to identify leaks and their functional consequences, they have found leakiness in the brains of patients with different conditions, including those who have suffered a brain trauma, a stroke and epilepsy.

“These tools have made a difference at how we are looking at diseases like lupus and bipolar disorder,” says Dr. Bowen.

Using research methods and software tools pioneered by Dr. Friedman’s group, in collaboration with the Biomedical Translational Imaging Centre team at the QEII, patients are scanned on a 3T MRI. With the initial 3T MRI infrastructure funded by the QEII Foundation, including a $2.5-million gift from the Gauthier and David families, the research scans allow very sensitive detection of blood-brain barrier leakage, which is not visible in normal clinical MRI imaging of these patients.

Dr. Calkin is hopeful that, in the future, MRI imaging will not only be used to determine the effectiveness of treatment and predict disease trajectory but also as the first diagnostic tool in psychiatry.

“It has that potential, but this will take much more research,” says Dr Calkin. She and Dr. Friedman continue to work collaboratively. They are now studying patients with psychosis and other psychiatric conditions. 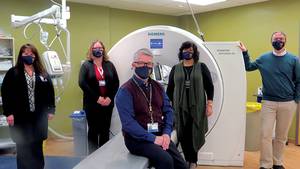 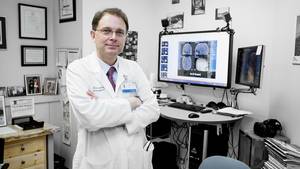